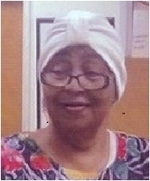 On Friday, February 12, 2021, the heavenly hosts rejoiced, while the earth mourned at the announcement that, Edna Mae Webster also known to many as, "Auntie Edna, Mama Edna, Miss Webster or Sis. Webster, had gladly accepted her Father's invitation to rest from her labor, and that her work down here on earth was complete to the best of her ability. At her demise she was a resident of Port St. Lucie FL and former resident of Indiantown, FL.

Blessed be the God and Father of our Lord Jesus Christ, who has blessed us in Christ with every spiritual blessing in the heavenly places. Ephesians 1 :3

Edna began her early education at Booker Park Elementary School in Indiantown, Florida. After completing her primary education in the public schools of Martin County, she graduated with the class of 1971 from Martin County High School. She then furthered her education by attending and graduating from Indian River
Community College, Fort Pierce, Florida. Edna worked at Indiantown Middle School for years, helping students in many capacities.

She was a member of Mount Zion Missionary Baptist Church, Indiantown, where she served as Youth Director for numerous years earning the title of Mother Webster. Serving in Mount Zion, she wore many hats. Mother Webster, as she was affectionately called, was a cook second to none. She would always make sure that if there was a family in bereavement, or was hungry, she would send enough food to feed an army.

Edna was a planner, she would sit on her bed with a pencil and scrap paper and plan parties, family reunions, weddings and many other family gatherings.

She devoted her life to caring for her loving Mother and holding the Family together.

Arrangements have been entrusted into the professional care of Thorne's Mortuary in Stuart, FL.